Letters were collected by “Tuesday’s Children,” an organization created to support the families affected by 9/11.

“I can walk you step by step through the 11th. Anything after that for approximately four years, I couldn’t tell you anything,” Perez recalled.

“Kids were pulled left and right to go home early,” Perez remembers. She said she was in her middle school orchestra class when her teacher told the class the World Trade Center was attacked. 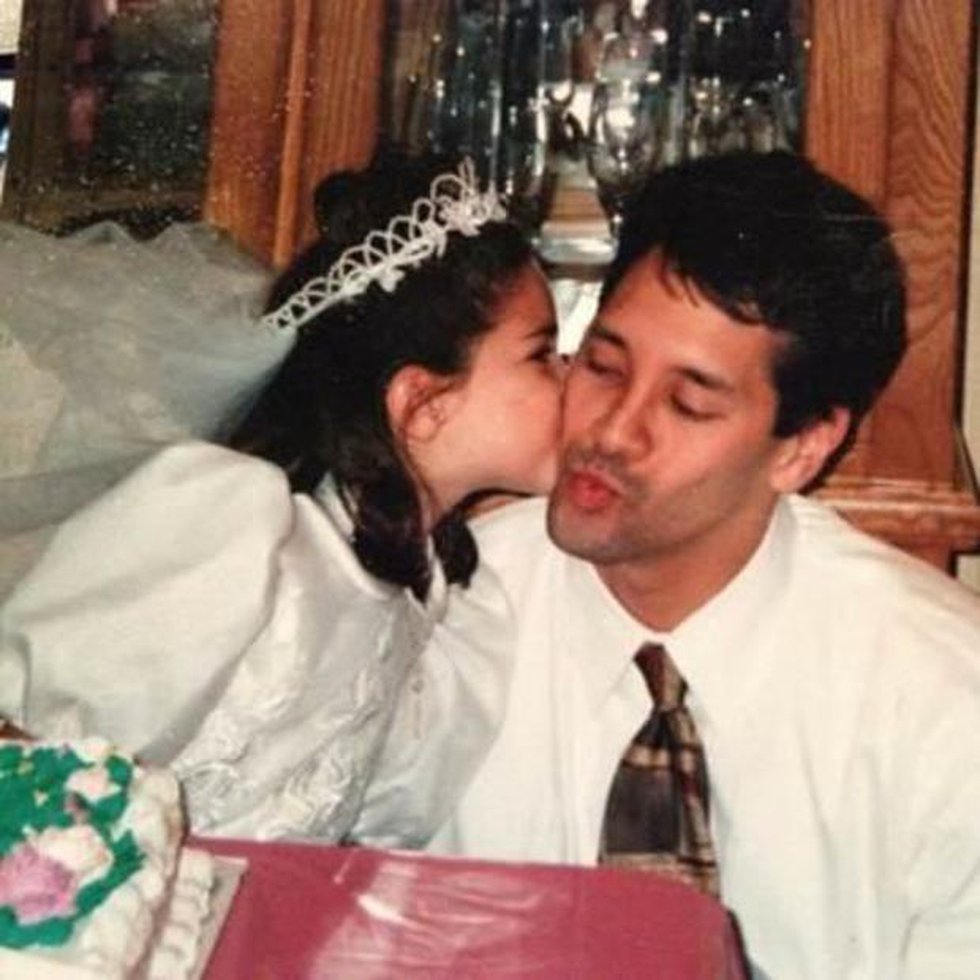 Anthony Perez was working as a technical specialist on the 103rd floor of the North Tower on September 11, 2001. (via CBS News)

“It was just an instinctual– I mean, the sinking feeling in my stomach. I had just been to the World Trade Center. I had just been to work with my dad a week prior. He had just gotten the job there relatively recently, and I knew he was no longer here,” said Perez.

Lauren Charette, 28, had the opposite experience. “If she can walk you step through step through her day, I’ve got five minutes.” 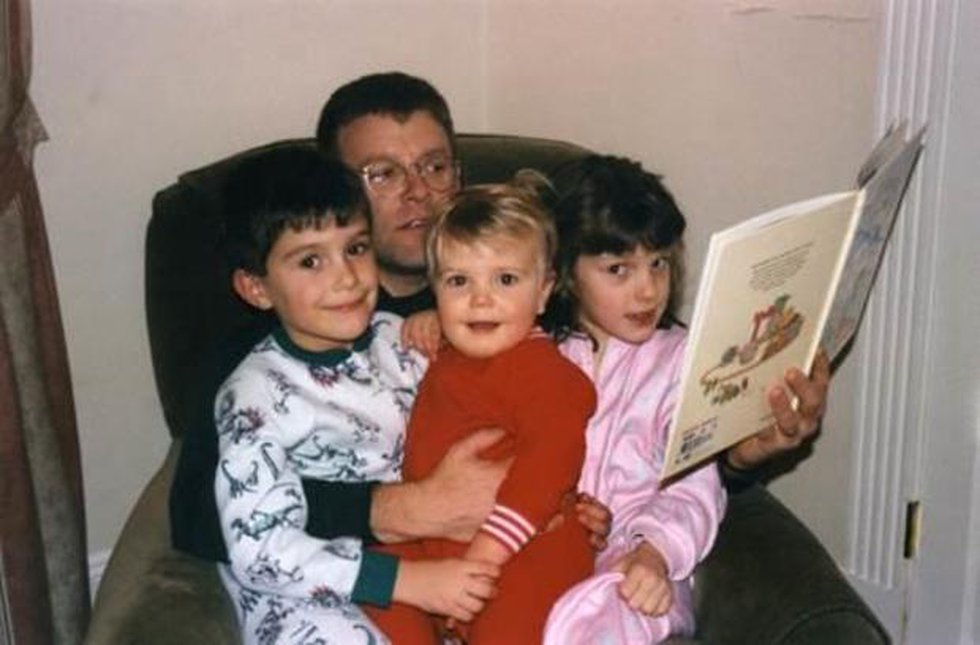 Mark Charette was holding an annual planning meeting on the 100th floor of the North Tower on September 11, 2001. (via CBS News)

Charette’s father Mark usually worked in his office in New Jersey, but on 9/11 he was holding an annual planning meeting on the 100th floor of the North Tower. She was only eight years old at the time.

“My mother knew he had gone into the city that day .. she sat me and the older of my two brothers down and told us that the towers had been hit,” Charette said. “And this conversation, I don’t really remember very well, but she must have sat us down a couple days later, it was definitely the weekend, and told us he was dead. The only memory I have in-between about it is someone at recess when we still weren’t sure, ‘cause I know somebody was saying something, and I know I got super upset.” Charlette said. 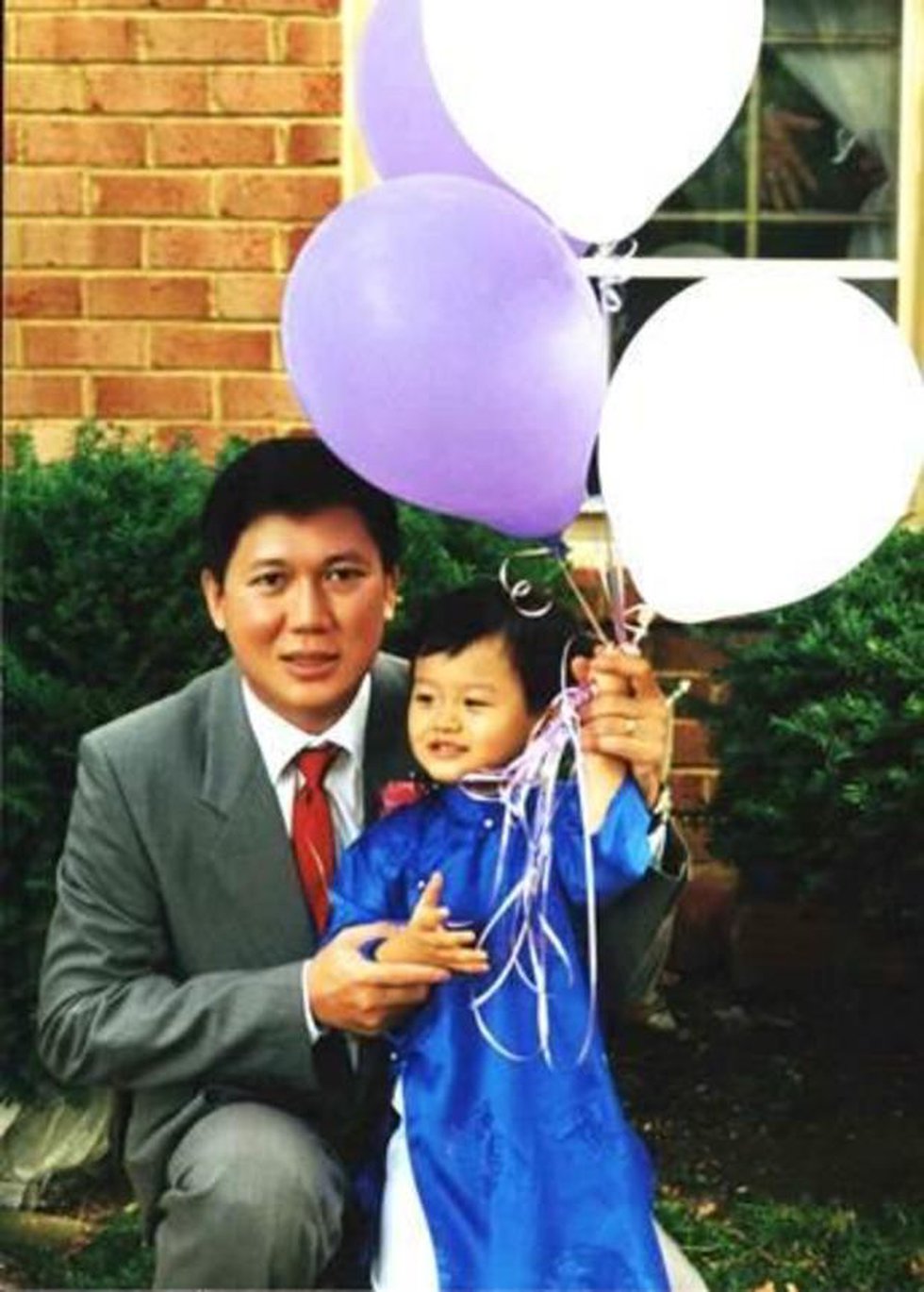 An Nguyen was just four years old when his father, Khang Nguyen died in the Navy Command center at the Pentagon. (via CBS News)

An Nguyen, 24, says he has a vague memory of September 11. He was just four years old when his father, Khang Nguyen, died in the Navy Command center at the Pentagon.

“I honestly thought he would come back at some point. And it was a couple weeks later when the funeral came,” Nguyen recalled, “I saw my father’s casket, it was pushed into the cremation chamber. That’s when I knew that he’s not gonna come back… it took even a couple more years after that even to thoroughly understand that he’s not gonna come back, and try to live my life and develop my identity without my father.” 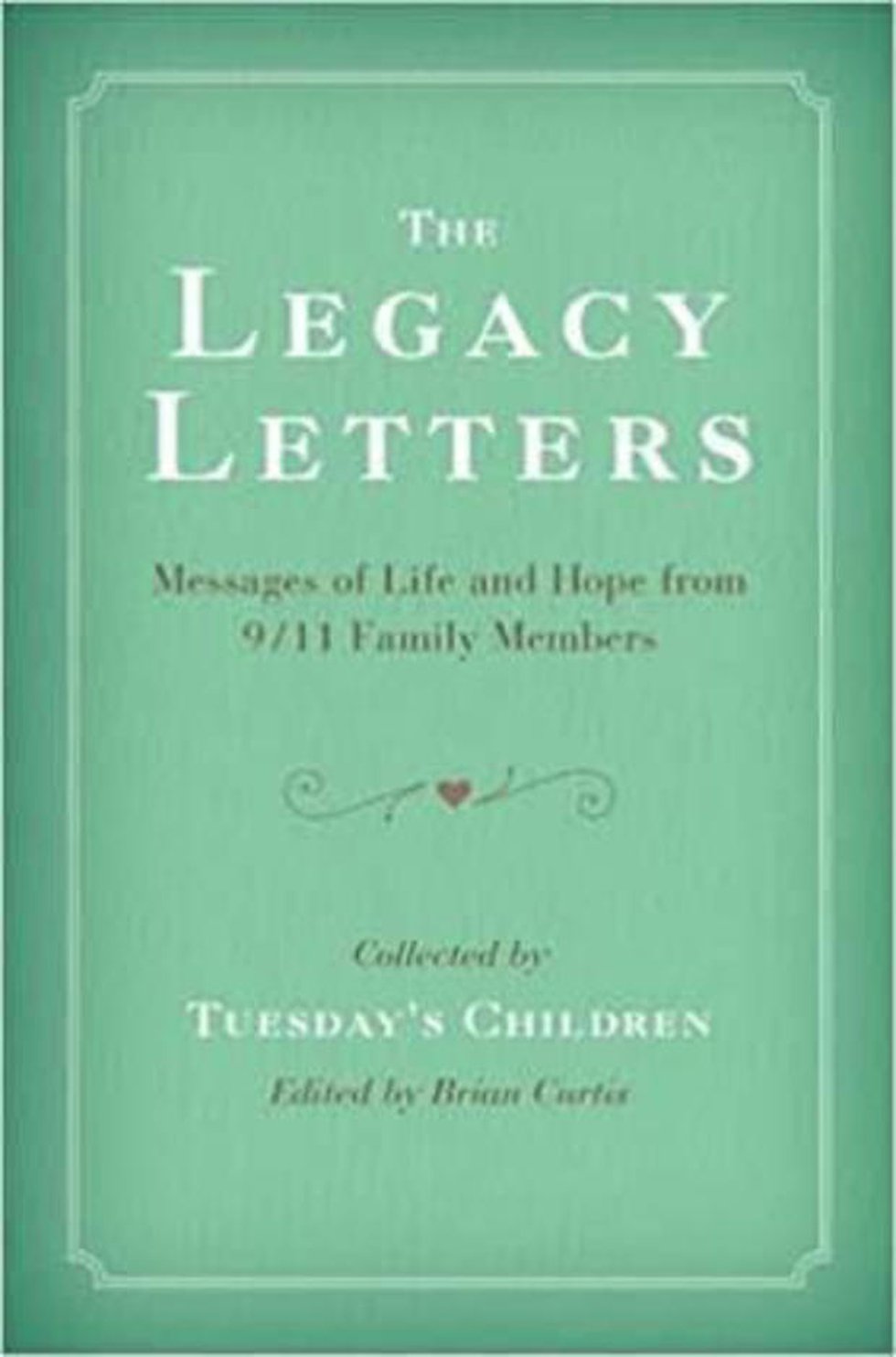 Letters were collected by “Tuesday’s Children,” an organization created to support the families affected by 9/11. (via CBS News)

Perez, Charette and Nguyen wrote to their late fathers a decade ago in a book called, “The Legacy Letters.” Their letters were collected by “Tuesday’s Children,” an organization created to support the families affected by 9/11. Earlier this month they revisited their letters with “CBS Mornings” co-host Gayle King.

Perez said writing the letter in 2011 was cathartic: “I want him to be proud. I want him to know that though his life was cut short, that he is leaving a lasting impact on the planet. He was my everything.” 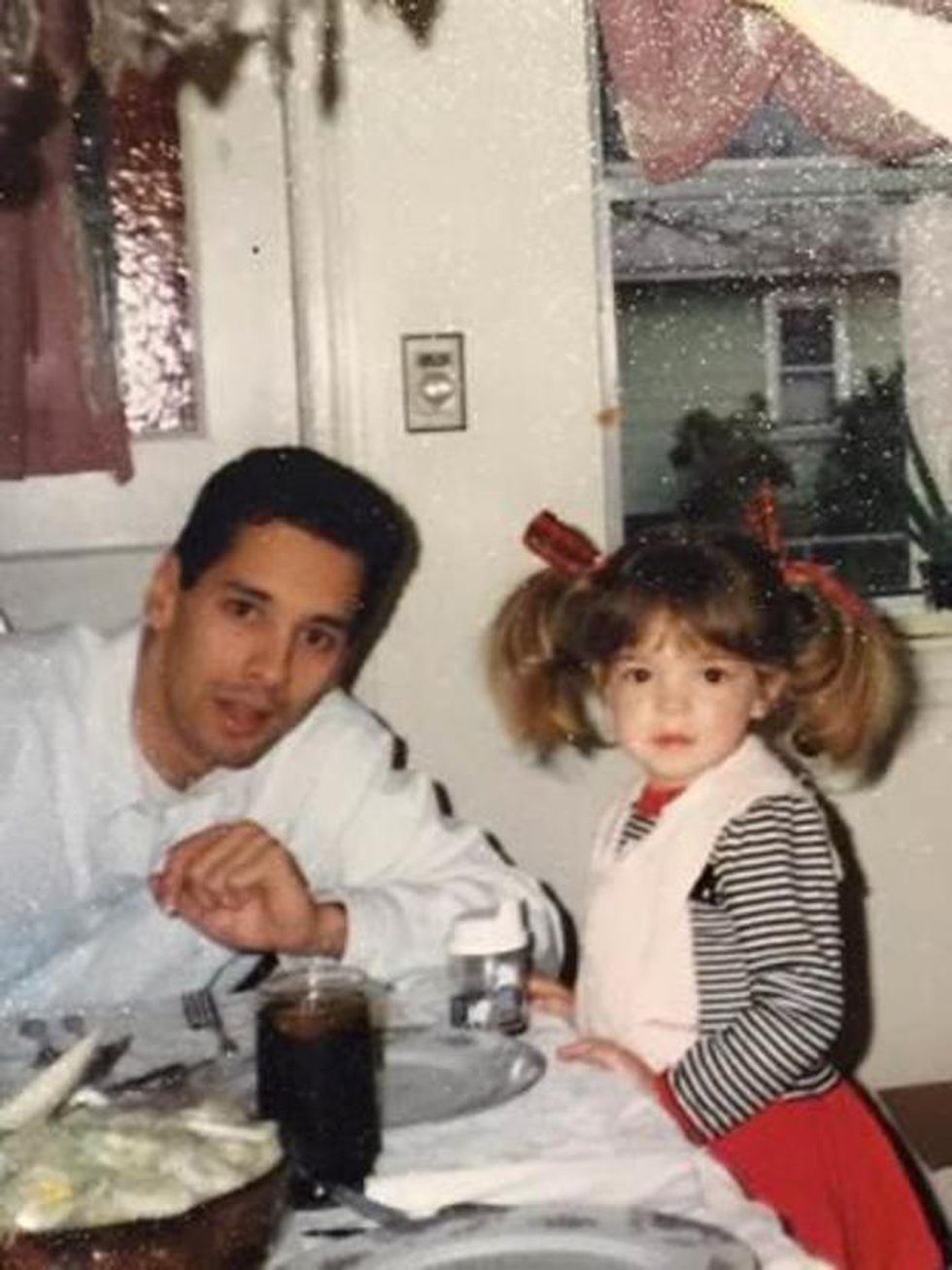 Anthony Perez said writing the letter in 2011 was cathartic. (via CBS News)

In the past ten years, I’ve done so much growing up and even more teaching. I graduated high school and got into the college of my dreams, but neither was possible without learning my first lesson on September 11: Life is too short –chase your dreams.

Dad, I miss just hanging out with you, Anthony James and little Alexis. Since you were always such a big Star Wars fanatic. You passed your passion to us. Anthony James used to say to you, “Watch a Star Wuhz” and you would run around yelling and tickling us. You always made a joke of the little things, and I absolutely adored the short amount of time we had together. It is funny, though: Trying to pick a single memory is like asking someone to pick her favorite dream. These memories are the dreams that I hold close to my heart to keep me going.

I love and miss you dearly,

“I wrote about closure in my letter.” Perez said. “And I sit here and I listen to everyone and I don’t know what closure is anymore. Is it having a– place for me to go visit where he’s buried? Is it coming to peace with what happened? Is it forgiving the individuals who caused this?”

“I don’t know what closure is. I’ve worked really hard to get where I am to overcome this terrible thing. And does that mean it’s closure? Does it mean I don’t have moments of utter weakness? Some days it’s impossible to get out of bed.”

“Have you forgiven?” King asked.

“Carrying hatred in your heart doesn’t help anyone,” Perez said. “It’s exhausting. It’s not worth it. And they held a lot of hatred for whatever their reasons were. And I feel bad for that. And it breaks my heart that we all grew up without our parents for that.” 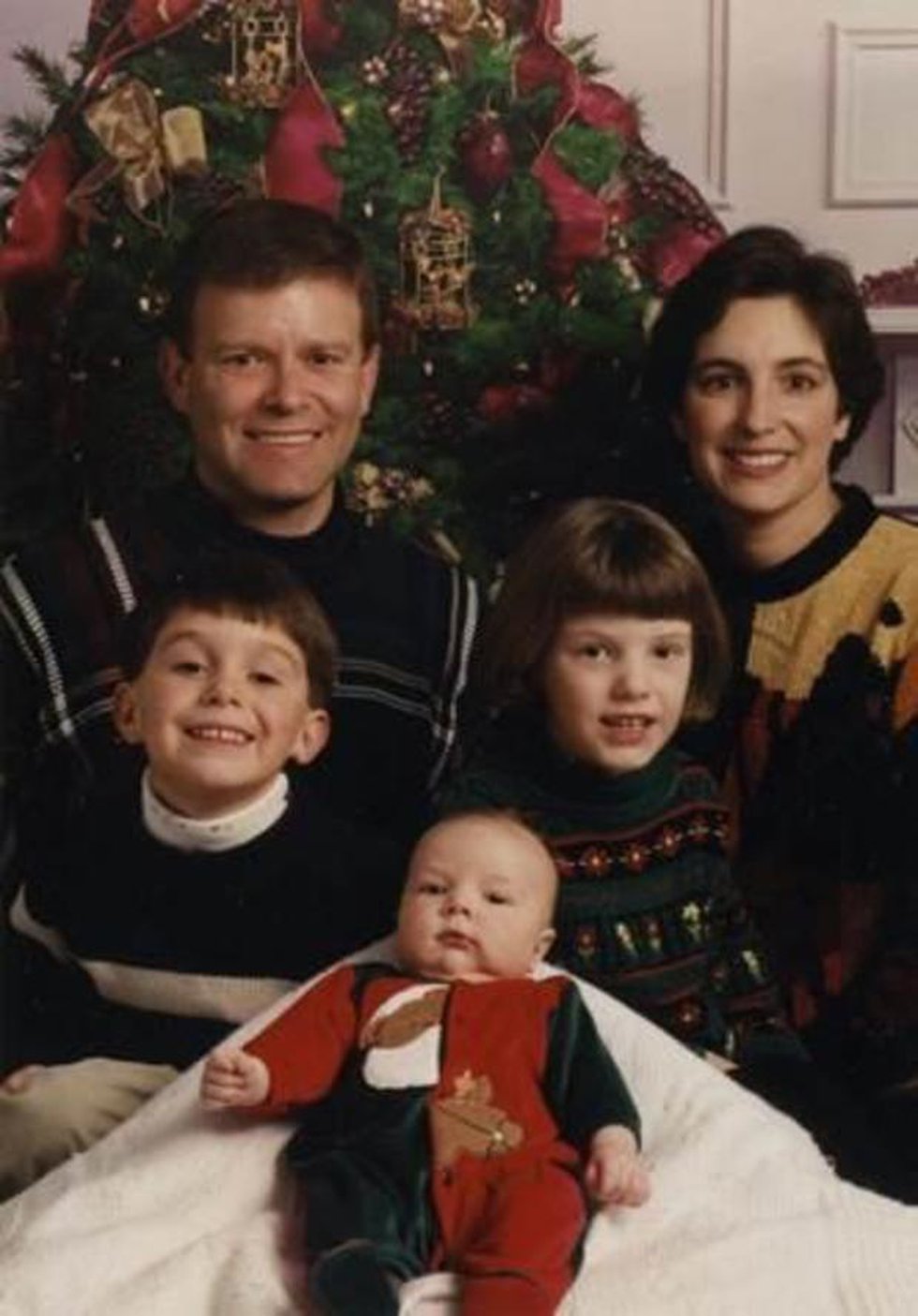 Could you answer some of the questions I’ll never get to ask? I’m looking at colleges–which one should I pick?

I passed my black belt test like I promised. Were you watching? Did you see me spar at nations?

I’m graduating in June. Will you clap for me?

I passed my driver’s test–isn’t that scary?

Do you think I’m picking the right career?

Do you miss going out to breakfast?

Did you know I learned how to start a campfire?

Would you still take my door off the hinges when I slam it?

Do you remember the beach? Could you teach me how to build sandcastles?

Have you read what I wrote?

Would you go hiking with me?

Do you love me?

Most of all I wanted to ask, am I still your little girl?

“Still your little girl. That question really got to me because I think every daughter at some point asks that question of her father,” King said.

“I always felt like it was the big question. It was also the first question that I came up with. That was the one I wanted the answer to the most,” Charette said. 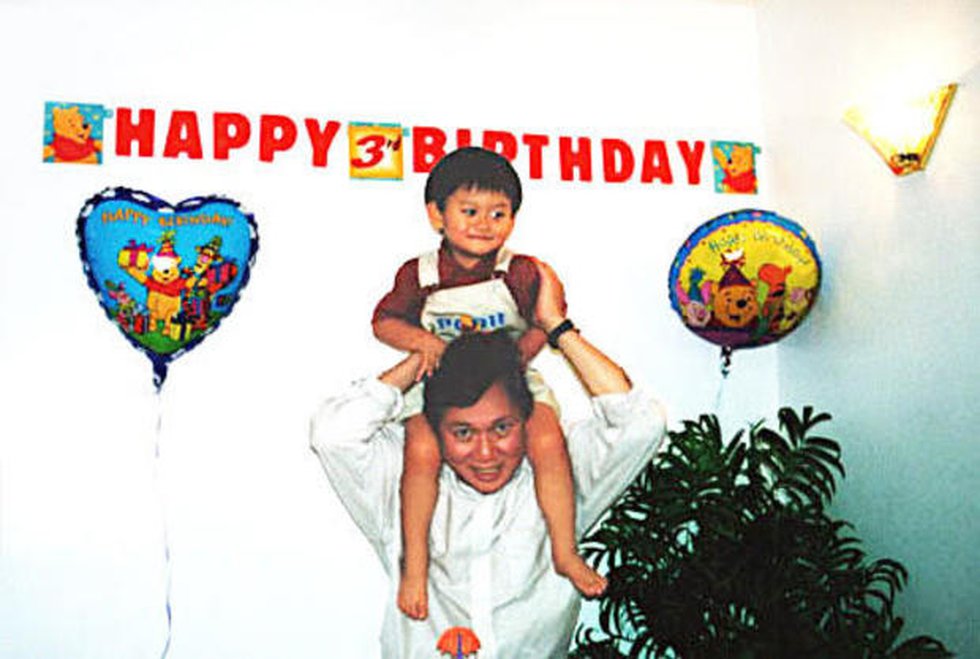 Khang Nguyen with his son An. (via CBS News)

I had just turned four years old when you were gone, killed in the terrorist attack while working in the Pentagon on September 11, 2001. My memory of you is vague. Our family photos and the stories from Mom help to keep your memory alive. I love you very much, even though you’re not a part of my everyday life.

Early on that morning, September 11, while Mom was seeing me off at the school bus in front of the house, you suddenly ran out and waved to me. You called out loudly, “An, say goodbye to Daddy one more time,” while the bus was driving away, a gesture you had never made before. It was the last time father and son would see each other.

Now, I am fourteen years old. Sadly, you could not be here for my music lessons. I am saddened and sometimes angry that I was forced to grow up without a father. I have learned about terrorism and the war on terror.

You are my hero. You are always in my heart. I am so proud to be your son. I promise to be a good student and study hard so that when I become a man, I will make you, up in heaven, happy and proud of me.

“A lot of people will not understand what the word terrorism means until you’re directly impacted by that. And that’s something that is even hard to describe.”

Nguyen says that 10 years later he feels like he’s made his father proud. He will graduate from with a masters degree in software engineering from George Mason in December. “That degree was an honor for my father because he didn’t get the chance to complete his.”