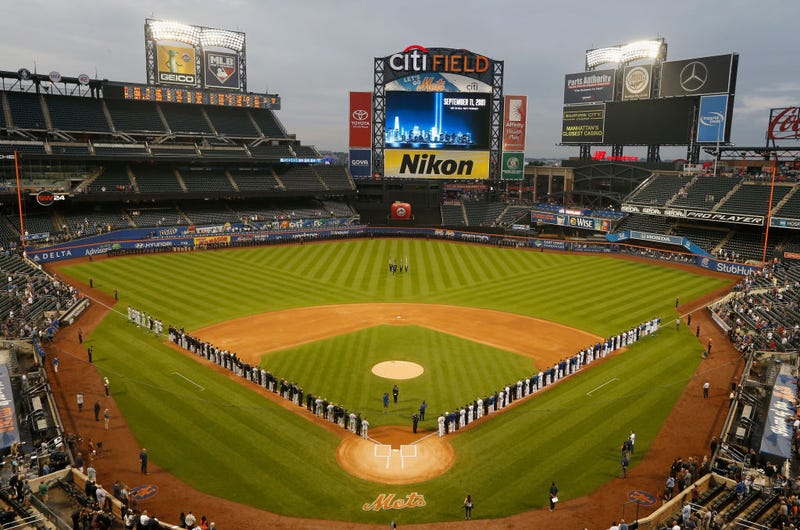 A general view of the national anthem as the Miami Marlins and the New York Mets line up with New York City first responders to commemorate the 17th anniversary of the September 11 attacks, at Citi Field on September 11, 2018 in the Flushing neighborhood of the Queens borough of New York City.

The ceremony will start at 7 p.m. with the game to follow. WCBS 880 will have special live coverage from the ballpark starting in the afternoon.

The Mets will wear FDNY, NYPD, Port Authority Police Department, Department of Sanitation and Department of Correction caps during batting practice and the game to honor the bravery and sacrifice of 9/11 responders.

The teams’ managers from the 2001 season will handle the ceremonial first pitch, with Bobby Valentine throwing to Joe Torre.

Over 14 former Mets coaches and players from the 2001 team are expected to attend the game, including Hall of Famer Mike Piazza, who hit an iconic home run in the first pro-sporting event in the city after the Sept. 11 terror attacks.

Mets employees who lost loved ones on 9/11 and those who worked tirelessly at Shea Stadium to aid the support effort will also be part of the ceremony along with representatives from Tuesday’s Children, The Visionary Network from the 9/11 Museum, Answer the Call – New York Police and Fire Widows’ & Children Benefit Fund, which was created by Rusty Staub, and The FealGood Foundation.

The NYPD Cops and Kids Chorus will perform the National Anthem.

Fans are encouraged to take mass transit to the game.

The Mets Virtual Vault also has an extensive collection of videos, photos and stories over the last 20 years commemorating the team’s connection to 9/11.