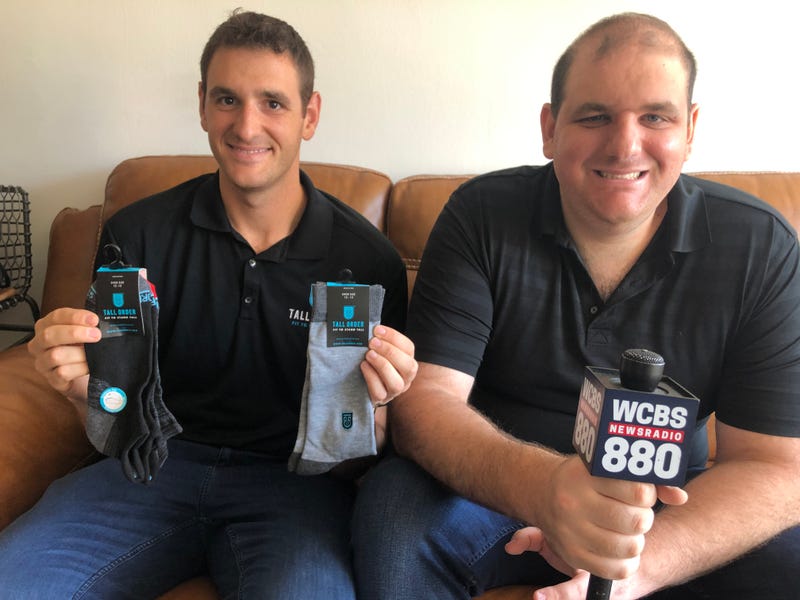 NEW YORK (WCBS 880) — Throughout the summer, WCBS Newsradio 880 is presenting a series of reports looking ahead to the 20th anniversary of the 9/11 attacks. Our series, “Rising from the Ashes,” tells stories that inspire and teach; stories that honor the sacrifices of that day and how that work continues to impact the lives of others 20 years later.

Dan and Mike Freidman are hard to miss in a crowd standing at 6’9” and 6’11”, respectively.

“We were actually called the ‘Twin Towers’ growing up,” said Dan.

The brothers noted that their nickname was fun in their childhood, but quickly faded after Sept. 11, 2001, when the father, Andrew Friedman, was killed at the World Trade Center.

“Our dad… he was everything for us. He was our coach, our mentor, our guiding light in life,” Dan said.

The twins were just 11-years-old at the time, and said in the days after the attacks, they would accompany their mother to hand out new socks to first responders in Lower Manhattan.

“We didn’t know this until years later but, this was our mom’s way of sort of helping us with the grieving process,” Dan explained. “She had received some advice that in order to get us to not focus on being sad and wallowing, [should should] make us feel involved in the process, make us feel like we’re part of the recovery efforts.”

It was that experience that led the brothers to start their company, Tall Order Socks – which sells socks and footwear for men with large feet, carrying up to a size 20.

It’s so far been a huge success and a portion of their revenue goes right back to helping a group that stepped up to help them when they were grieving the loss of their father: Tuesday’s Children.

“I vividly remember them stepping up for our family when we needed it the most,” said Mike. “We are a part of, now, a community and a group of people that will be linked forever.”

Tuesday’s Children was founded in the aftermath of the 9/11 attacks to support the children of fallen first responders – and the group is still committed to that same mission, 20 years later.

The twins say they are proud to be a part of the organization, and work to help children like them overcome painful losses.

“You’re still always grieving, you’re never gonna fully move past it but, at the same time, we’re gonna be there for you with other people like you,” said Dan.

The brothers visit communities around the country suffering from tragedy and trauma to inspire hope.

“We’re able to take a negative and turn into a positive,” said Mike. “We’re able to rise above tragedy – so if we can do it, so can you.”