You are here: Home1 / Blog2 / The Legacy Letters at 10: A Conversation with Tara Feinberg 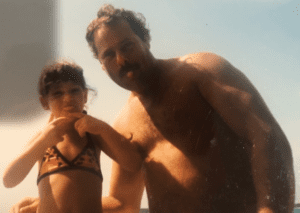 Ten years ago, 100 family members penned emotional letters to the loved ones they’d lost on 9/11, looking back on the decade since the attacks and sharing their personal memories. Collected and published by the organization Tuesday’s Children, the “Legacy Letters” not only stand as a written memorial to the victims, but also tell a powerful human story that captures the almost unfathomable long-term impact of the day. As the 20th anniversary approaches, we spoke with some of the families who contributed legacy letters in 2011 to ask about the evolution of their feelings and what they wish the world knew.

Today’s blog post — the first in a series highlighting these raw conversations —  features Tara Feinberg, who lost her father Alan Feinberg. Alan was an FDNY member serving as aide to the Battalion 9 Fire Chief on 9/11; he was 48 years old when he died rescuing others. Tara was 18 at the time. Today, she’s a married speech pathologist with two small children, living in New Jersey. Brian Curtis, who edited the compilation book, was ordained to perform her wedding ceremony.

“Everybody who was alive on 9/11 and old enough to remember can honestly say they weren’t the same person the next day.” 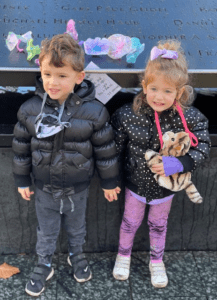 How has your perspective changed since “The Legacy Letters” were published?
I’ve become more aware of the state of the world as an adult. I’ve slowed down, I’ve gone more inward, I want to deal with the hard stuff. I’ve gotten caught up in some of the anxieties; a lot came to the surface when the kids [four-year-old twins] were born. And I think a lot of the fears I felt at first were not so much “new-mom”-related, they were more control-based because of the time the control got away from us. In the time since they were born, this has definitely become very real. My dad is really not here, he’s missing this. And I look at the kids and I think more about the legacy I have to leave for them. And I want them to be really proud of it. Grandpa was a hero. There was a really big fire and he died, he saved a lot of people. It’s not about me anymore, it’s about the next generation. It starts with them understanding and being aware of what happened.

If you wrote a second legacy letter today, what would you tell your dad?
I would say that we didn’t move on, we just figured out how to move forward. I have had time to process how I want to handle things, and I have clicked out of survival mode. I got my bachelor’s, my master’s, met my husband, had kids, bought a house … all because of him. That was our plan. I wish he was here for all those things, but I feel like he is. He lives in my kids, their personalities reflect him.

Tell us something about your dad that captures the essence of his personality.
When I was learning how to drive, we were on Route 18, and he made me pull over because I wasn’t driving fast enough for him. He always had Jeeps, I drive one now, it makes me feel connected to him. My dad was a jokester, he really never grew up. We used to have sock fights in our house — he would take out all the socks and let my brother and me run around hitting each other with socks. And the game wasn’t over until someone cried. My dad was always funny and present. I feel like he’s still here sometimes, messing with me. So much of my kids’ joy and the way they act … it’s just like what my dad would have been doing.

What do you wish other people understood a little better about your family’s experience?
I think I just want people to know that it’s still with us, the loss doesn’t go away, the grief doesn’t go away. The fact that my grief is public doesn’t mean it hurts less. That the littlest things can be a trigger. And that what happened on September 11th is responsible for so many unprecedented things that happened afterwards. I want this to be considered. The day changed everything. I just don’t want it to be forgotten.