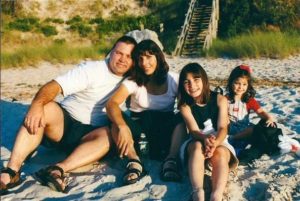 Ten years ago, 100 family members penned emotional letters to the loved ones they’d lost on 9/11, looking back on the decade since the attacks and sharing their personal memories. Collected and published by the organization Tuesday’s Children, the “Legacy Letters” not only stand as a written memorial to the victims, but also tell a powerful human story that captures the almost unfathomable long-term impact of the day. This fall, we’re speaking with some of the families who contributed legacy letters in 2011 to ask about the evolution of their feelings and what they wish the world knew.

Caitlin Nelson was five years old when she lost her father James, a Port Authority Police Department first responder. In the letter she wrote to him 10 years ago, she tells him she fears her memories are starting to fade. But, she reassures him, “You’re everything to me; you are bigger than a hero — you are a father who will never be forgotten … I swear I’ll be with you someday.”

Caitlin passed away six years after writing that letter.

Today’s blog post features a conversation with her mother Rosanne and sister Anne, who do their best every day to honor the memories of James and Caitlin.

What does “20 years” mean to you? How has your perspective changed?
Anne: The pain never goes away, it just lessens to some degree. It’s kind of difficult to wrap my head around “20 years.” The 12th anniversary really made me reflect, because at that point more time had passed without my father in my life than with him. Something that’s huge for me is wanting everyone who lost their lives to never be forgotten — doesn’t matter if it’s 10 years or 30 years. It’s still significant to their loved ones and to this nation.

Tell me a little more about James and Caitlin.
Rosanne: Jimmy was a writer. And he would have been so proud of both his daughters. Caitlin was on the Dean’s List and wanted to be a pediatric oncology social worker. She enjoyed knitting hats for premature babies. And this — writing about her dad — was very important to her. She’s not here to do it, but thankfully Annie is sharing the best she can for Caitlin, and she’s doing a great job.

Anne: Caitlin’s goal in life was to pay it forward and spread love wherever she went. One of her ultimate acts of paying it forward was to donate all her organs … just as our dad’s legacy was sacrificing to help others, she saw life as an opportunity to assist those in need. She just channeled grief into something positive whenever she could. My dad could be goofy sometimes. He liked to joke around and be playful. Whatever stress he was dealing with at work, he never brought it home, it wasn’t visible to us. He really showed that he enjoyed life despite what might have been going on.

If you wrote another legacy letter to James today, what would you tell him?
Rosanne: I would tell him to take care of Caitlin and to please keep watching over Anne.

Anne: I would say that it hasn’t been easy growing up, hitting huge milestones, without him, but I’ve tried the best I could to make him proud and follow in his footsteps and honor everything he taught me about the Golden Rule. My dad was going back to grad school and working at the Police Academy as an instructor … I’m a teacher too, I teach special ed … I think I was trying to honor him by pursuing a career that also gives back, like he had and was continuing to work towards. I would also tell him that I miss his bear hugs and that I try to think about the good times I had with him and not the things I don’t get to experience.

Anne, what were some of the ways you and your sister coped with the pain as children?
Anne: For Caitlin and I, America’s Camp [a camp for children who had lost parents on 9/11 or in the line of duty]. I actually have a quote Caitlin wrote down in a letter to herself at camp — she wanted to write about her experience — and she said “Even with Pandora’s evils in the world, the good is there if you light a candle and not curse the darkness.” That was in 2016, she wrote that to her future self. And she really made some lifelong friends there. Tuesday’s Children was huge in our lives too. It was nice just to meet other families … to be in the company of others who have gone through similar loss.

What’s something you wish people understood better about your experience?
Rosanne: That life can change in a matter of minutes.

Anne: Do what you want to do when you have the chance, because you don’t know. You don’t know if you’re going to have tomorrow or the next couple of hours — love everyone you have here while you can.